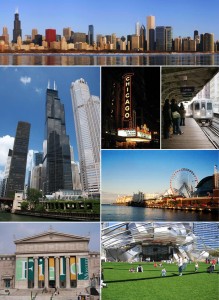 If you’re thinking of shipping your car to a new location, you may not be sure of how to proceed. Faced with this task some people will just drive their cars to their new homes, but this will often be time-consuming and deceptively expensive. Gas costs have to be considered and time away from work adds up as well. And then you have to also remember that long trips may require hotels or other accommodations as well. That’s why it is usually a better idea to hire a car transportation company to move the cars wherever they need to be.

Moving a car from Chicago to any other place in the country is made easier by the bevy of highways and interstates that are essential to the city. Illinois is found in the central portion of the US and has a high number of interstates and highways. So many in fact that Illinois is tied with Pennsylvania for having the largest number of primary interstates which run through them. In addition to these highways, there are several major airports and railways in Illinois. This makes moving a car to or from Illinois easier than in other places.

Now, if you want your car shipped out of Chicago, you will have to consider what type of container you want your car to be transported in. An open container is the most common choice for car transportation, but it can leave your car open to potential damage from the environment. While a closed truck or container can do a better job of protecting cars, it is more expensive. Usually, vintage or very expensive cars are moved in closed containers in order to protect them.

With Direct Auto Transport getting your car moved from Chicago to other major cities is easy, because the state is so centrally located. Chicago is only 283 miles to Detroit and 359 to Columbus, we can move a car there within a day or two. Then of course there are longer trips, like the 759 miles it takes to get to Philadelphia or the 719 to Atlanta, which can take anywhere between five and eight days.

If you have to move your car to (or from) Chicago then don’t hesitate to call us. The state of Illinois has an abundance of interstates and roadways, which makes it easier and faster to move through via truck. Then of course there are many major cities which are within several hundred miles of Chicago, making it simple to accommodate moving any car.

Additional mileage figures from Chicago to other major cities: